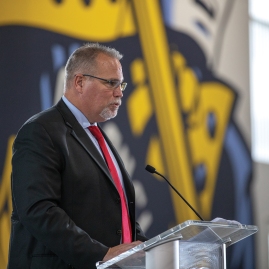 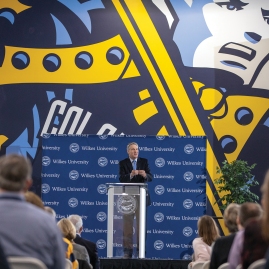 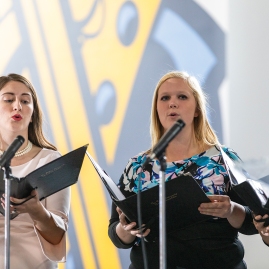 Left, University Trustee Jason Griggs ’90 addresses attendees at the launch of the Gateway to the Future Campaign on Homecoming weekend. Center, Wilkes President Patrick F. Leahy shares his vision for making Wilkes one of the finest small universities in the nation. Right, Wilkes vocalists sing the alma mater at the campaign kickoff. Photos by Knot Just Any Day.

Homecoming Weekend 2018 – often a time to remember the past — kicked off with a celebration of Wilkes University’s future. Alumni, faculty, staff and students gathered for the Gateway to the Future Campaign Kick-Off Celebration.  The event, held in the in the McHale Athletic Center, launched the public phase of the $55 million fundraising campaign that will help to transform the University. The kickoff highlighted the development goals for the upcoming years for Wilkes, brick by brick, opportunity by opportunity and student by student.

The event was hosted by chief development officer Margaret Steele, who introduced two current students and one young alumna – all first-generation college students – who spoke about the personal transformations each achieved during their Wilkes educations. (Please see the separate story on this page for excerpts from their speeches.)

Jason Griggs ’90 spoke on behalf of the Board of Trustees. Noting the campaign’s success during its silent phase, Griggs said, “This campaign is an opportunity for each of us to have impact at Wilkes University. Whether you are a golden colonel, a graduate of our most recent class, or a long-time member of one of our giving societies, Gateway to the Future offers an opportunity to make a difference in a way most meaningful to you personally.”

Calling the campaign kickoff “a special event on a special weekend,” Leahy noted that when he wrote the University’s strategic plan, also called Gateway to the Future, he was reminded of a quote that he had used in his installation address at Wilkes. “I quoted the American architect Daniel Hudson Burnham, who said ‘Make no little plans, for they have no power to stir the soul….Make big plans; aim high in hope and work,’ ” Leahy said, explaining that he took his cue from those words to advance an ambitious plan for Wilkes.

Leahy outlined four major campaign projects that would be supported by the Gateway to the Future Campaign:

Leahy asked alumni to support the campaign at any level possible. Because alumni support is crucial to Wilkes’ rankings in lists of the top colleges in the United States published by magazines like U.S. News and World Report, Leahy stressed that gifts of any size are helpful.

Leahy closed by saying that everything the campaign funds impacts one constituency. “You see, like everything at Wilkes, it’s about the students,” Leahy said, referencing the three student speakers who had opened the program. “I hope you will support the campaign in their names. On behalf of them – and all of our students – thank you.” 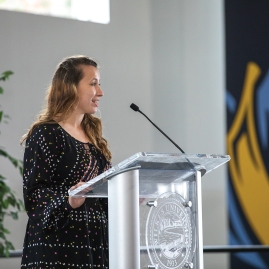 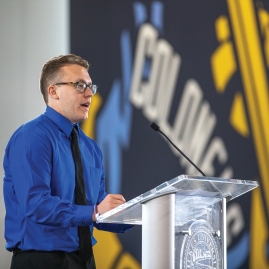 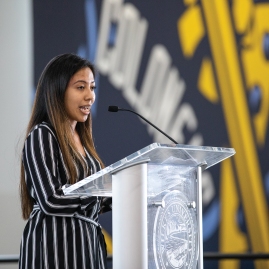 “To those of you who have made Wilkes a beacon of hope that shines brighter with each effort you make to support each and every capital project: thank you. Because of your Wilkes legacy, we now begin ours. “

“My time at Wilkes University has been absolutely nothing like the vision I had in place as an incoming freshman. I have learned to listen to the advice of others and to believe in myself. And while I believe you should plan and have a plan, the most important thing we can do at Wilkes is to look for opportunities and take advantage of every opportunity that comes your way. “

“To my fellow first-generation college students in the room, please remember to thank those who helped you achieve this goal….To the faculty, staff, and administration of this University, you have built a place of comfort and understanding, one in which I knew I could succeed, grow, and call my home. Lastly, to the donors: with each and every one of your donations, you have been able to not only give me, but numerous first-generation students, the resources we needed to succeed. Without you, I would not be able to call myself a Wilkes alum.”