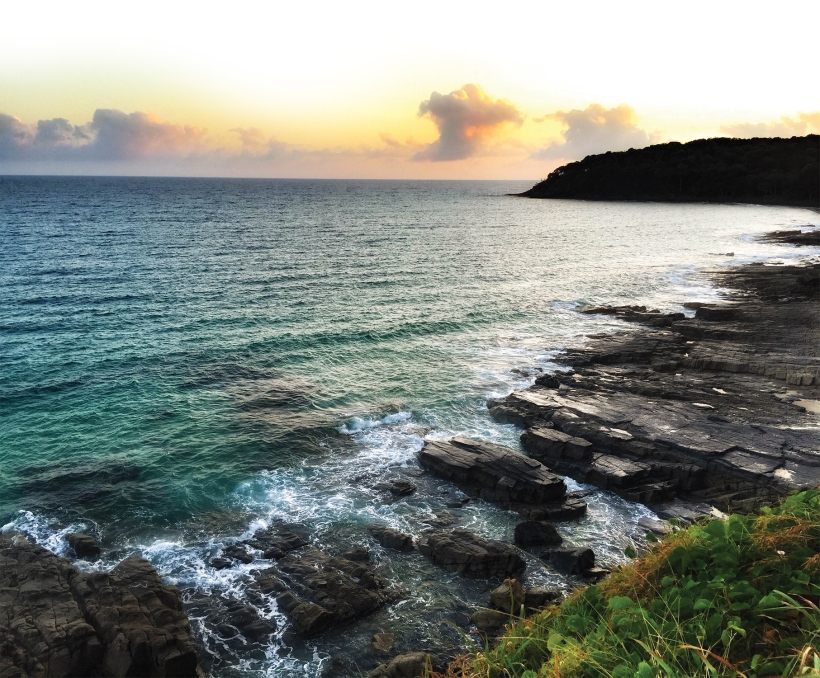 A spectacular view in Noosa, Queensland, Australia, which was one of the many coastal areas visited by Allison Roth ’11 on her year-long adventure.

It started with a casual conversation with a family friend at a party. Allison Roth ’11 was chatting with an Australian woman who had backpacked across the United States in her 20s.

“She asked me why I didn’t do the same thing – in Australia,” Roth recalls. “I remember saying, ‘I can’t because I’m saving for retirement.’ As soon as the words were out of my mouth, I realized how ridiculous that sounded. And I couldn’t stop thinking about what she’d said.”

There was nothing dull about Roth’s life after she graduated from Wilkes. She was living the life 20-somethings dream of: A communication studies major, she had a job in her field working for Citibank in New York City. She lived in an apartment in nearby Hoboken, N.J., and had a lively social life with a great circle of friends

All of that changed on Aug. 3, 2015, when Roth left her job, gave up her apartment, and took off to spend a year traveling across Australia, taking only a backpack and and a large sense of adventure. For the next year, Roth and her friend, Marrah Fry, traversed the land down under in a red Toyota Corolla purchased for $1,400 after finding it on Gumtree, Australia’s version of Craig’s List.

“Our plan was not to have a plan,” Roth says. The women lived in a different location every three or four months, staying in hostels, couch surfing (today’s parlance for sleeping on someone’s couch), or answering ads for roommates. Along the way, they picked up jobs – 13 in all – including selling cowboy hats at a rodeo, picking blueberries and cleaning houses.

“I told myself, ‘You only have a year to do this, so make this the best year of your life,’ ” Roth says.

Before they ended their trip on Aug. 3, 2016 – when their travel Visas expired —  they had 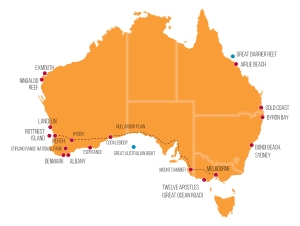 visited Perth, Melbourne and everywhere in between, including the Great Barrier Reef and Australia’s Gold Coast. Toward the end of their travels, they took side trips to Thailand and Bali.

Roth’s favorite place was Byron Bay, where she worked for the hostel Accommodation, and attended sunset parties on the beach almost every night. “Australia,” she says, “has the most beautiful sunsets in the world.”

After returning to the States, she landed a new job as an event planner at Hunter College in New York City. Now living in East Harlem, she looks back on a year that taught her life lessons. “The whole year was a compilation of experiences pushing boundaries. I jumped off cliffs and learned to ride a skateboard,” Roth says. “I became less of an extrovert. I’d go to places by myself and talk to people I didn’t know. And I learned that minimalism is the key to a happy life. I lived simply and I was the happiest I’ve ever been.”

The following image galleries chronicle highlights from Roth’s trip. Please click on an image to see the description:

Picking blueberries was one of 13 jobs that Roth took to earn her way across Australia. It was also the tastiest – despite long days in the heat doing repetitive work.

Roth and friend, Canadian Ayan Salad, map out the next leg of their trip sitting on the red Toyota Corolla they purchased for traveling. 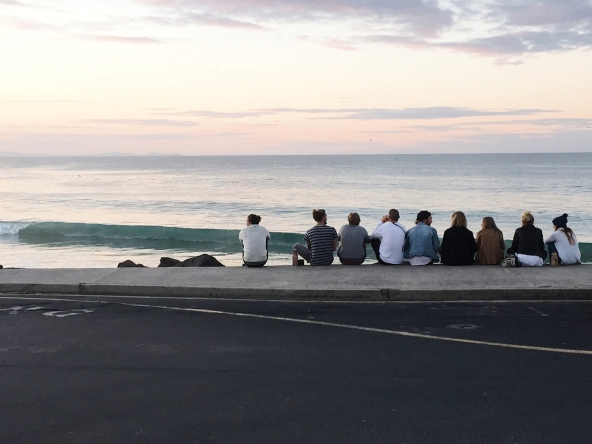 Young people gather to watch the sunset at Byron Bay, Roth’s favorite spot on her travels.

Roth learned that kangaroos – a critter synonymous with the land down under – are the Aussie equivalent of deer. They’re just as plentiful and pose hazards after dark. 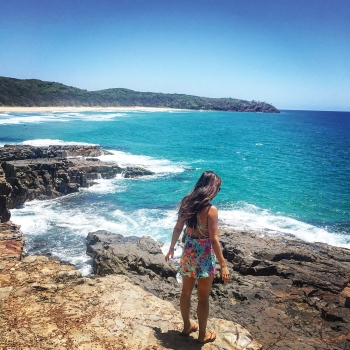 Roth takes in the view of the ocean at Noosa, a popular coastal destination and the site of one of her weekend jaunts. 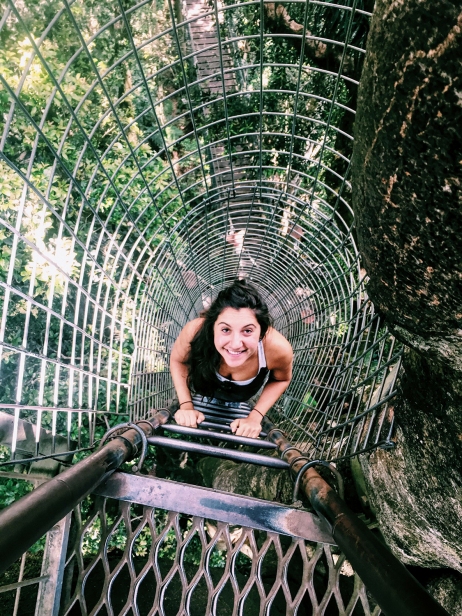 Roth climbs a ladder up a tree in Lamington National Park to access a tree-top walk providing a wonderful view above the branches. 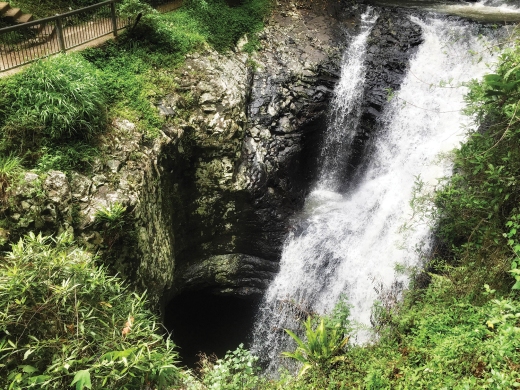 A waterfall was part of the lush beauty of Springbrook National Park, which encompasses the Gondwana Rainforests. 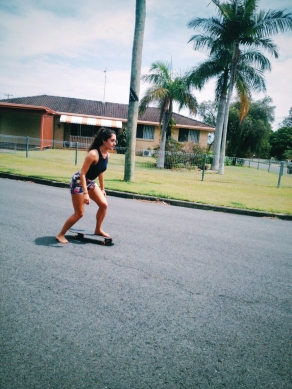 Skate boarding was a skill Roth acquired on her journey. She calls it “the ultimate in Aussie living.” It took a lot of practice to master it, she recalls, but eventually used it to travel to and from work. 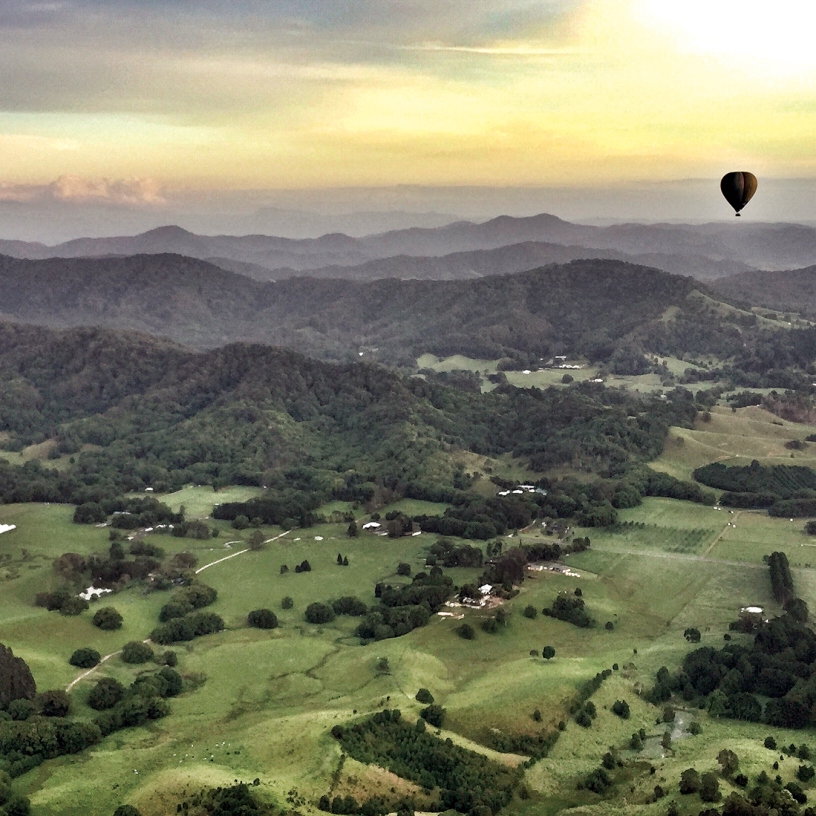 As an employee at the Byron Bay Beach Resort, Roth and other staff received a balloon ride as a Christmas gift. It provided this unforgettable view.

Roth and friend Marrah Fry give a tongue-in-cheek demonstration of couch surfing, the term for the practice of sleeping on the sofas of friends and acquaintances while traveling. It was a frequent practice for the adventurers.

Roth pauses on the 16-hour drive up the east coast. “There so many roads where you are the only one traveling on them for hours. They don’t wind or turn. They just go straight.”

Beautiful Whitsunday Island off the central coast of Queensland was part of another weekend trip.

A stop in Melbourne brought the travelers to Flinders Street Station, one of the city’s train stations.

Encounters with koalas were routine and welcome.

Driving on the Great Ocean Road from Melbourne to Adelaide, Roth passed the 12 Apostles, the name for 12 rock formations jutting out of the sea.

No, it’s not water. It’s Wave Rock in Hyden, a famous formation passed enroute to Perth on the West Coast.

Roth, front, and Fry answered an ad to sell hats at a rodeo.

The travelers celebrate reaching the halfway point on their journey across the Nullarbor Plain, a flat, treeless, semiarid area of Southern Australian, located on the Great Australian Bight Coast.

Nullarbor Plain is the world’s largest piece of limestone. Part of the drive has the “90-Mile Straight,” which is the longest straight stretch of road in Australia. 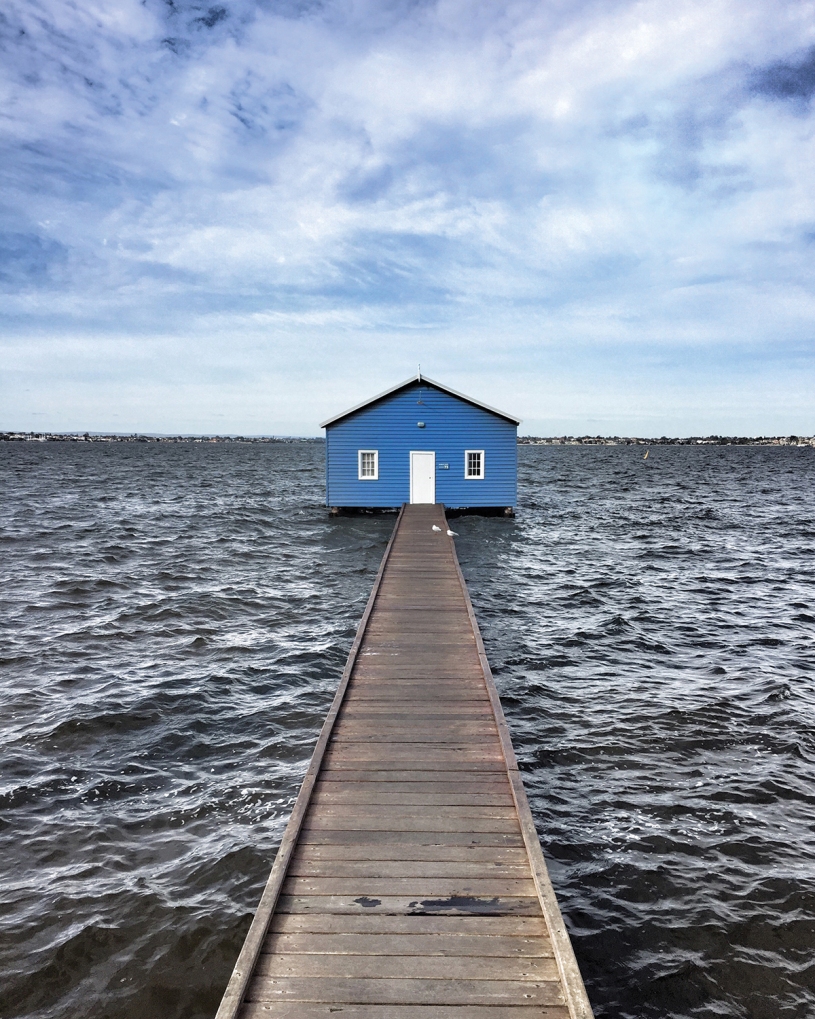 A boat shed in Perth was a favorite image during the course of Roth’s trip. 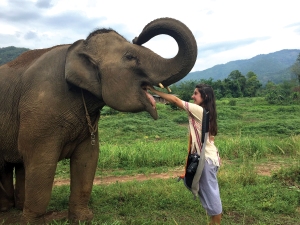 Roth and her friends took a side trip to Thailand. Getting up close to elephants at a sanctuary near Chiang Mai was “the best day of my life,” Roth says. She took the 10-day trip in May 2016. The women also visited Bali for four days at the end of their Australian sojourn.

Roth and Fry ponder the end of their adventure seated on the trunk of their faithful red Toyota. When they left, they sold the car for parts.

One thought on “Australian Adventure”